Dear Mr. Mayor Dec. 2, 1963
I am inclosing descriptive material on my plan. The Statue of Saint Francis of Assisi, patron saint and namesake of the City of San Francisco on Alcatraz Island in San Francisco Bay.
I have yet to hear who was nominated by now, Governor Brown or by the late President John F. Kennedy or if it will be up to President Lyndon B. Johnson to select the Committee.
I do not know if you are fully in accord with my plan which would be a dominating attraction of visitors to San Francisco, in fact I do believe it would become the eighth wonder of the world if completed as I would plan it.
Mainly a monument to Peace, a symbol of love and hope, and of religious freedom in America. A museum for religious art and a place to hold musical recitals and concerts which would be amplified over the Bay Area and sent by television around the world.
It would contain an auditorium for religious and for United Nation Meetings.
It would be open to all religious of the world, favoring no particular sect or religious organization or demonization. It would do much to create religious unity and better understanding between nations. A true monument to “Peace on Earth.”
It would be reached by rapid transit trains and by bus as there would be no parking on the island. I would like too to see the Delta King or some singular boat serve as transportation from San Francisco, Oakland, Richmond, and Sausalito, as many would enjoy and like to have an opportunity to travel to and from this Island and also Angel Island in this manner.
It will take the combined efforts and funds of the Federal Government, State, City and County of San Francisco, rapid transit, bridge authorities, and planning commission to draw up workable plans.
Fare, admission, fees, docking fees, concession fees would eventually pay for all construction costs and prove self-supporting, and financially profitable as well as beneficial for city, state, nation, and the world.
I did send a similar letter to the late President, who I do believe did look with favor on this plan for such a statue. I do intend to write and send similar plans to Governor Brown and President Lyndon B. Johnson.
I do know it was you who suggested the introduction of a bill in Congress that would select a committee to decide to wat purpose Alcatraz Island would be put to.
I do wish you could have remained in office for one more term so as to set the proper ground work for what ever is planned.
I do not know whether or not you have seen my proposal which is now on exhibit in the business office of the San Francisco Library at 138 Kearney Street. I do hope you find time to view it and would like to know your thought on the matter.
Thanks you, and I do wish you continued success in your future matters!
I am, Bernard J Cassidy 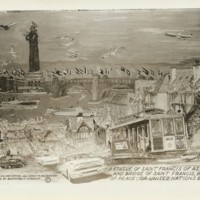 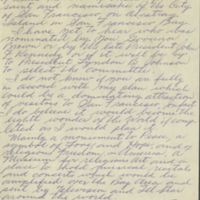 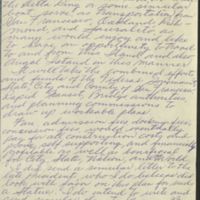 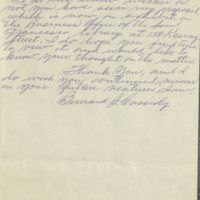 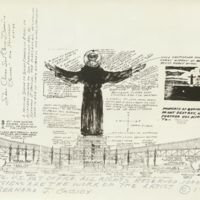 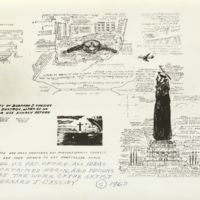 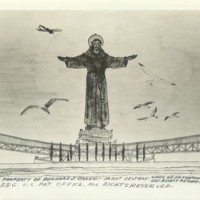 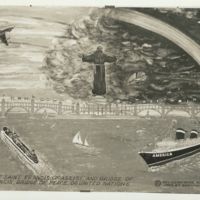