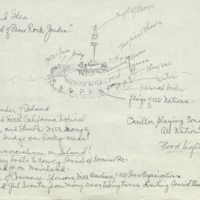 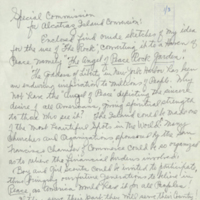 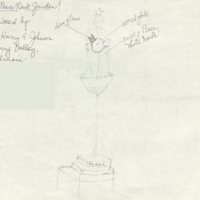 Letter from Mrs. Harry A. Johnson to George Christopher

Letter about building an Angel of Peace statue on Alcatraz Island

Special Commission for Alcatraz Island Conversion;
Enclosed find rude sketches of my idea for the use of “The Rock” converting it to a Haven of Peace, namely “The Angel of Peace Rock Garden.”
The Goddess of Liberty in New York Harbor has been an enduring inspiration to millions of people. Why not have the “angel of Peace” depicting the sincere desire of all Americans, giving spiritual strength to those who see it? The Island could be made one of the most beautiful sport in the World! Many churches and organizations, sponsored by the San Francisco Chamber of Commerce could be so organized as to realize the financial burdens involved.
Boy and Girl Scouts could be invited to participate, thus bringing our future generations to belive in Peace, as America would raise it for all peoples! If they serve their part, they would serve their country!
Kindly give my crude sketches some consideration.
Most sincerely,
Mrs. Harry A. Johnson